NEW YORK (WABC) — Eyewitness News is providing continuous live updates and coverage with information that you need to know during the winter storm.

NYC transit service updates
Governor Cuomo late Monday announced that the New York City subways will resume above ground service at 5 a.m. on Tuesday and the Long Island Rail Road and Metro-North plan to resume service by 4 a.m. ahead of the morning rush after earlier suspensions. LIRR will operate on a weekend schedule through Tuesday. New York City buses continue to run on a reduced schedule – 75% of regular weekday service, and the Staten Island Railway is operating. MTA Bridges and Tunnels’ ban on empty tractor trailers and tandem trucks remains in effect.

NYC Ferry service impacted
The NYC Ferry is operating on a weekend schedule on Tuesday February 2nd while crews work to clear snow at each landing.

LIRR passenger train service is temporarily suspended systemwide to ensure the safety of our customers and employees during this intense winter storm. Our team is working hard to clear the rapidly accumulating snow from our tracks & switches.

Commercial flights at JFK canceled
Airline carriers at JFK have canceled all commercial flights for Monday. Travelers were advised to contact their airline for further information about rebooking.

NJ mega vaccine sites remain closed Tuesday
Governor Phil Murphy on Monday announced that state offices and all six vaccine mega-sites will remain closed on Tuesday, February 2 due to Winter Storm Orlena. New Jersey will remain under a state of emergency in response to the winter storm.

Jobs for snow removers
The city Department of Sanitation is looking to hire workers to help in the mammoth snow-removal effort. According to the city, the job pays $15 an hour, and up to $22.50 an hour after the first 40 hours that are worked in a week. Candidates must be at least 18, able to work in the United States, and be able to perform heavy labor. For more information, CLICK HERE.

NYC libraries update
Due to the continued inclement weather, all branches of The Brooklyn Public Library, The New York Public Library (which covers the Bronx, Manhattan, and Staten Island) and Queens Public Library will remain closed tomorrow, February 2. Additionally, NYPL will continue to suspend its Scan & Deliver service for research materials (as it requires onsite staff).

Catholic elementary schools closed Tuesday
All Catholic Elementary Schools in the Archdiocese of New York will remain closed on Tuesday, February 2, due to the impact of the continuing major snow storm. It will be another “traditional snow day,” with no remote instruction. Archdiocese high schools operate independently, so high school families need to follow instructions from their individual schools.

Snowfall update
More than a foot of snow has fallen in Central Park as of 1:00 p.m.

PATH suspending service
Starting at 3 p.m., all PATH service system wide will be suspended because of ongoing inclement weather. Alerts will be issued throughout the storm with updates.

Cuomo declares state of emergency for downstate NY
Governor Andrew Cuomo declared a state of emergency in New York City and nine other counties throughout the Hudson Valley and Long Island. Specifically, the counties included in the emergency declaration are Sullivan, Ulster, Dutchess, Orange, Putnam, Rockland, Westchester, Nassau and Suffolk counties. The governor also issued an advisory for travelers and commuters – depending upon the severity of the storm, above ground subway service, as well as service on portions of the Long Island Railroad and Metro-North, may be significantly delayed or stopped this afternoon. Additionally, a number of major roadways including the Long Island Expressway, I-84 and others could face travel bans if snowfall rates reach the expected two to three inch per hour rate. New Yorkers are being urged to avoid all unnecessary travel.

Alternate Side Parking regulations suspended in NYC
Alternate side parking has been suspended for the rest of the week due to the snowstorm.

Heavy snow, winds halt flight traffic
All flight activity at LGA has been suspended due to current weather conditions. Please contact your airline carrier for details on rebooking.

NYC Schools to remain all-remote on Tuesday
Due to continued severe weather conditions, all New York City district school buildings will be closed Tuesday, February 2, 2021. Learning Bridges and after-school programs are cancelled. All food distribution sites will be closed. While school buildings are closed, instruction will continue remotely for all students. DOE central and field offices will remain open.

State of Emergency in NYC
A state of emergency began at 6 a.m. in New York City. Officials are working to keep everyone off the roadways if possible. They’ve suspended outdoor dining, asking any business with a structure that can’t withstand the winds to dismantle those structures. If you have a vaccination appointment set with the city or state today- those appointments have been rescheduled for another day.

Heavy snow in NJ
Derick Waller reports the conditions overnight on Route 1 and 9 in Newark were poor. State DOT crews are spreading salt on major roadways, but it’s falling faster than they can keep up. Some highways are snow-covered, including portions of I-78 and Route 24. Governor Murphy declared a state of emergency across all 21 counties, shutting state offices and 6 COVID-19 mega-sites. NJ Transit is not running today.

Mayor de Blasio issues local State of Emergency in NYC
New York City Mayor de Blasio has issued a state of emergency, including restricting all non-essential travel as of 6 a.m. Monday. See the full list of who is exempt here.

CT Gov. Lamont activates state emergency operations for winter storm
Governor Ned Lamont today announced he is directing the State Emergency Operations Center, which is already activated in a virtual capacity for the ongoing COVID-19 pandemic, to remain activated for the purposes of monitoring and responding to conditions resulting from the severe winter storm that is forecast to impact the state beginning the morning of Monday, February 1, 2021. Lamont is also issued an order implementing a travel ban on certain tractor trailers. The order bans all empty and tandem tractor trailers from traveling on Interstates 84, 91, and 95, and all tractor trailers from traveling on Interstate 84.

Fordham University campuses closed Monday
All campuses of Fordham University will be closed on Monday, February 1 due to the incoming winter storm. No in-person classes will be held on campus. Students should look for messaging directly from their instructors regarding online instruction during snow days. Staff and administrators who are able to work remotely are urged to do so.

NY postpones COVID-19 vaccinations
Due to the impending snowstorm, New York State is rescheduling vaccine appointments at several locations on Monday. The affected locations are the following: Stony Brook, Jones Beach, Aqueduct, Javits Center and Westchester Center. People with appointments will get emails or text messages with new times and days to reschedule for this week.

Libraries close in Brooklyn
Brooklyn Public Library locations will be closed on Monday February 1, due to inclement weather conditions. E-books and virtual resources are always available on the library website: http://www.bklynlibrary.org/.

NJ issues State of Emergency
Governor Phil Murphy Sunday declared that New Jersey will enter a state of emergency beginning at 7 p.m. in response to the expected winter storm. All six COVID vaccination mega sites will be closed Monday and appointments will be rescheduled within the week.

NY Waterway Ferry Service suspended
All NY Waterway ferry service will be suspended on Monday, February 1 due to severe winter weather. NY Waterway will issue updates on Tuesday’s service as the storm develops.

New Jersey travel restrictions
New Jersey is preparing for the winter storm by urging people to stay off the roads! Department of Transportation (NJDOT) Commissioner Diane Gutierrez-Scaccetti has issued a commercial vehicle travel restriction on multiple Interstate highways in New Jersey based on the forecast for heavy snow and strong winds.
In addition to the commercial restrictions, all motorists are strongly encouraged to stay off the roads, particularly Sunday night and Monday. The safest place to be is at home.

New York City public school buildings closed
All New York City students will move to remote learning on Monday because of the winter storm. As for Tuesday, he says no decision has been made yet.

Food distribution will be canceled at schools as well as the learning bridges childcare program for Monday.

Catholic Elementary Schools of the Archdiocese of New York to close Monday
All Catholic Elementary Schools in the Archdiocese of New York, will be closed Monday, February 1, due to the expected major snow storm. Monday will be a “traditional snow day” with no remote instruction. All Catholic schools have snow days built into their calendars with contingencies for making up instruction time.
Archdiocese High Schools operate independently, so high school families need to follow instructions from their individual schools.

Mayor says NYC vaccine sites closed, Gov. says state-run sites open
Monday appointments have been postponed at COVID-19 vaccine sites operated by New York City. “The last thing we want to do is to urge our seniors to come out in the middle of a storm like this,” de Blasio said during a briefing Saturday morning. “It doesn’t make sense.” The Mayor said the hope is to get Tuesday appointments in.

Meanwhile, the governor’s office said vaccinations are still on for Monday at state-run sites. “People should assume their appointments are going forward,” Secretary to the Governor Melissa DeRosa said. But the state has a contingency plan. If they have to be canceled, people will get notified via text or email, and their appointments will be rescheduled for later this week.

New York Gov. Andrew Cuomo directed state agencies to prepare their emergency response assets ahead of a winter storm that could bring heavy snow and gusting winds to the Tri-State area.

“I have directed state agencies to prepare all emergency response assets and they stand ready to assist any of our local partners who may need help in the coming days,” Cuomo said. “We will also be closely watching the response of utility companies to ensure any power outages are addressed immediately.”

A release from the governor’s office says the Department of Transportation has 1,625 full-size snowplows that it can deploy in addition to hundreds of other plows, loaders, snowblowers, and graders.

At a briefing outside a Department of Public Works salt garage in Hicksville, Nassau County Executive Laura Curran urged people to stay at home when the storm hits.

“This time it’s really important since it’s going on for so long, we’re going to need to have our county guys and gals,” Curran said. “We’re asking you to stay off the roads as much as possible for our crews and for the other crews, but also for your own safety.”
Curran said the county has more than 21,000 tons of salt and 850 tons of sand ready to go.

There will be 115 plow trucks out on the road throughout the height of the storm over the next day and on Saturday, they started to brine roads.

People have been asked to stay off the roads during the brunt of the storm.

For weather updates wherever you go, please download the AccuWeather app. 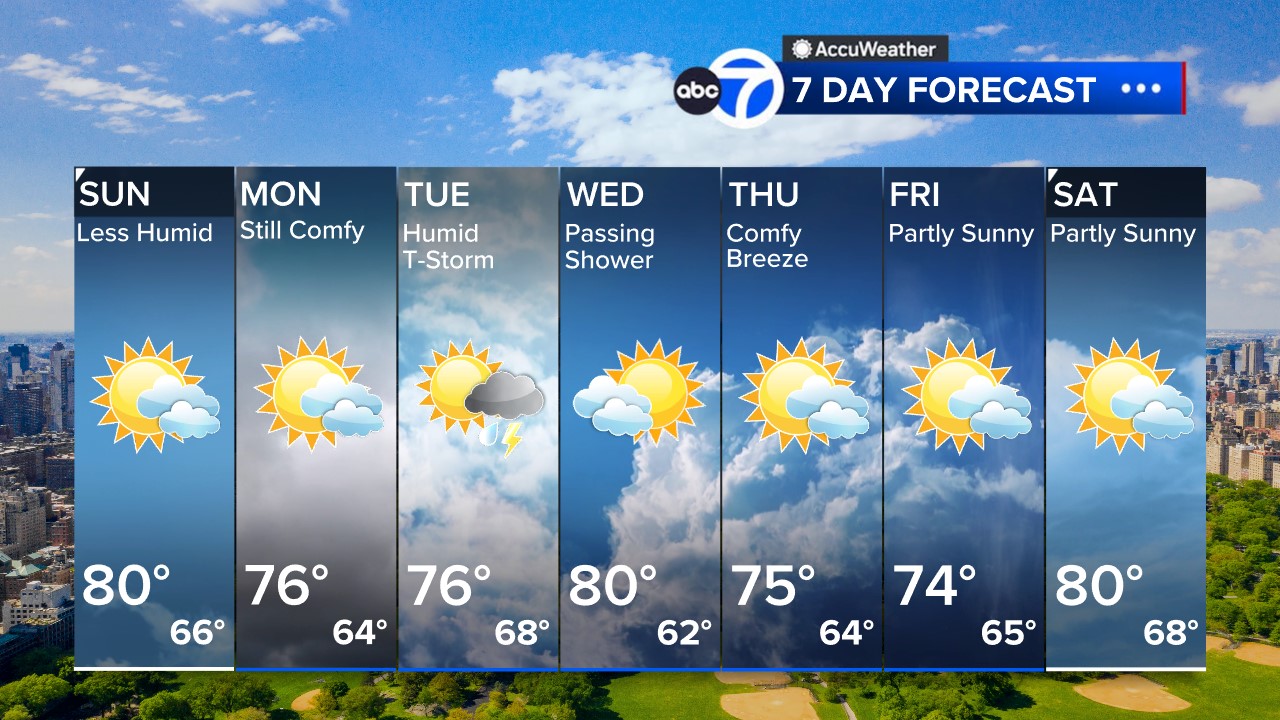 Crystal Cruises: Escape Cruise’s “kidnapped” staff and passengers speak out after fleeing to the Bahamas to avoid arrest warrants

The 1960s and the almost sunny sky start the week